How to Modify Google Text-to-Speech Voices

While Google focuses on the Assistant, Android owners shouldn’t forget about the Text-to-Speech (TTS) accessibility feature. It’ll convert text from your Android apps, but you might need to modify it to get the speech to sound the way you want it.

Modifying Text-to-Speech voices is easily done from the Android accessibility settings menu. You can change the speed and pitch of your chosen voice, as well as the voice engine you use.

Android will use default settings for Google Text-to-Speech, but you might need to change the speed and pitch of the Text-to-Speech voice to make it easier for you to understand.

Changing the TTS speech rate and pitch requires you to get into the Google accessibility settings menu. The steps for this might vary slightly, depending on your version of Android and your device manufacturer.

To open the Android accessibility menu, go to Android’s “Settings” menu. You can get to this by swiping down on your display to access your notification shade and tapping the gear icon in the top right, or by launching the “Settings” app from within your apps drawer. 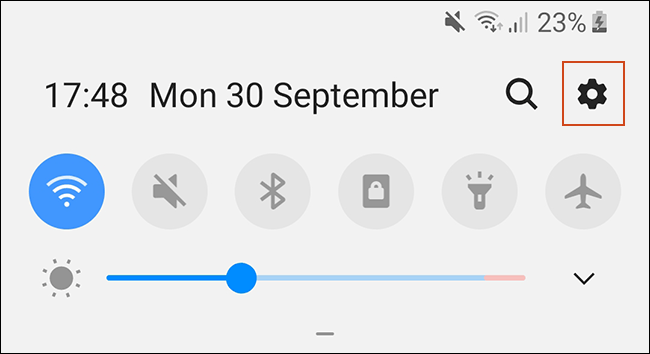 In the “Settings” menu, tap the “Accessibility” option. 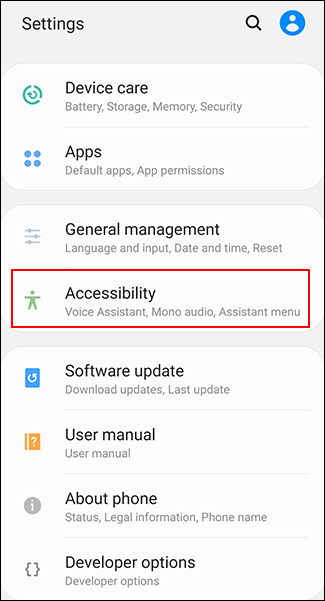 Samsung device owners will have two extra steps here. Tap “Screen Reader” and then “Settings.” Other Android owners can go straight to the next step. 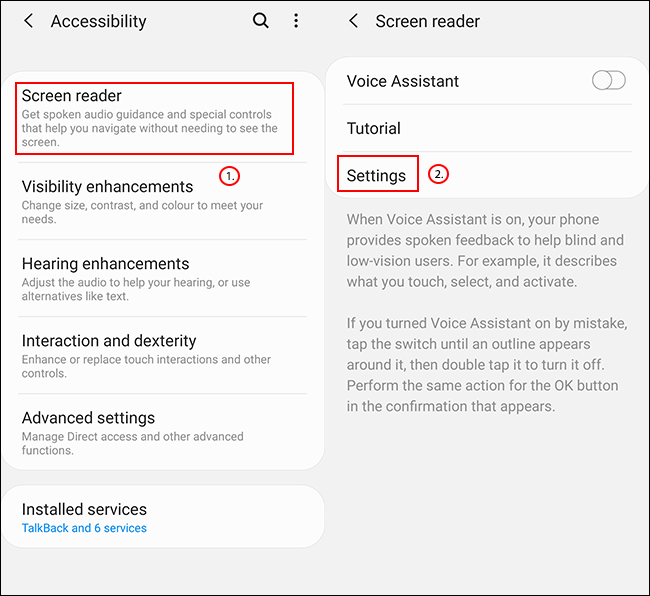 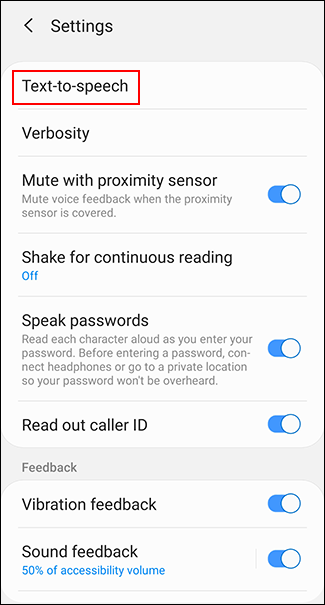 From here, you’ll be able to change your Text-to-Speech settings.

Speech rate is the speed your Text-to-Speech voice will speak at. If your TTS engine is too fast (or too slow), the speech could sound deformed or hard to understand.

If you’ve followed the steps above, you should see a slider under the heading “Speech Rate” in the “Text-to-Speech” menu. With your finger, slide this right or left to raise or lower the rate you’re seeking. 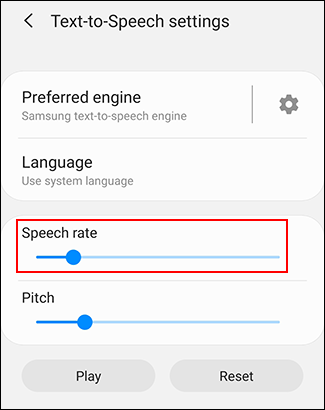 Press the “Listen to an Example” button to test your new speech rate. Samsung owners will have a “Play” button, so tap that instead.

If you feel the Text-to-Speech engine is too high (or low) pitched, you can change this by following the same process as changing your speech rate.

As above, in your “Text-to-Speech” settings menu, adjust the “Pitch” slider to the pitch you like. 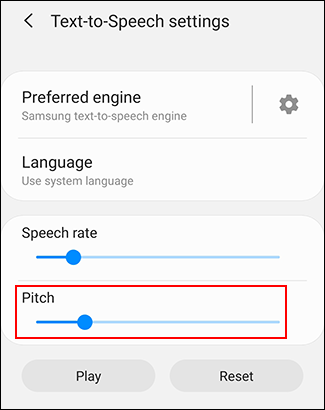 Once you’re ready, press “Listen to an Example” or “Play” (depending on your device) to try the new rate.

Continue this process until you’re happy with both your speech rate and pitch settings, or tap “Reset” to return to your default TTS settings.

Not only can you change the pitch and rate of your TTS speech engine, but you can also change the tone of the voice. Some language packs included with the default Google Text-to-Speech engine have different voices that sound either male or female.

Similarly, the Samsung Text-to-Speech engine included with Samsung devices has a varied selection of gendered voices for you to use.

If you’re on a Samsung device, you’ll only have one gear icon in the “Text-to-Speech Settings” menu, so tap that instead. 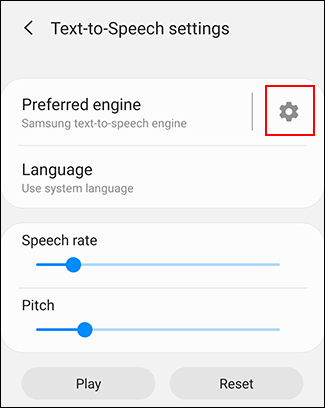 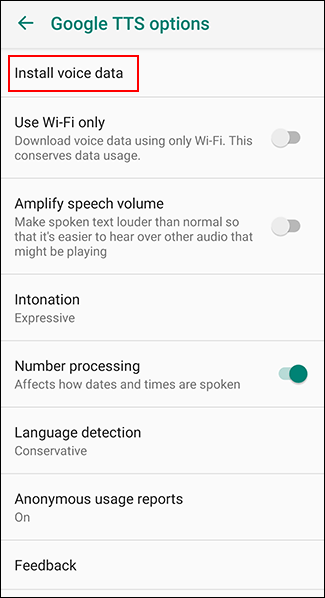 Tap your chosen regional language. For example, if you’re from the U.S., you might want to choose “English (United States).” 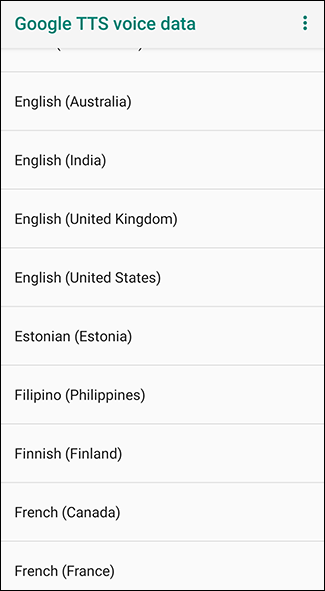 You’ll see various voices listed and numbered, from “Voice I” onwards. Tap on each one to hear what it sounds like. You’ll need to make sure your device isn’t muted.

With the “English (United Kingdom)” language pack, “Voice I” is female, while “Voice II” is male, and the voices continue to alternate in this pattern. Tap on the tone you’re happy with as your final choice. Your choice will be automatically saved, although if you’ve selected a different language to your device’s default, you will also need to change this.

If you need to switch languages, you can easily do this from the “Text-to-Speech” settings menu. You might want to do this if you’ve chosen a different language in your TTS engine than your system default language.

You should see an option for “Language” in your “Text-to-Speech” settings menu. Tap this to open the menu. 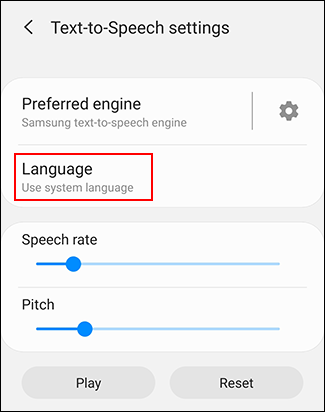 Choose your language from the list by tapping it. 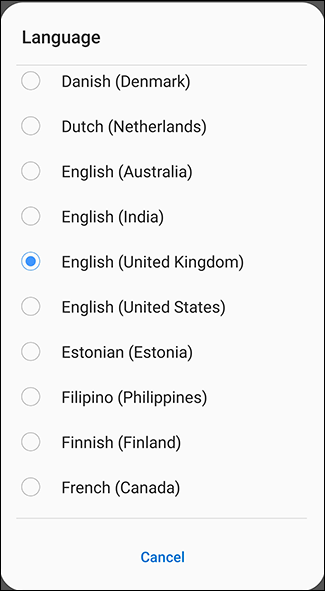 You can confirm the change in language by pressing the “Listen to an Example” or “Play” button to test it.

If the Google TTS language isn’t suitable for you, you can install alternatives. Samsung devices, for instance, will come with their own Samsung Text-to-Speech engine, which your device will default to.

Alternative third-party Text-to-Speech engines are also available. These can be installed from the Google Play Store, or you can install them manually. Example TTS engines you could install include Acapela and eSpeak TTS, although others are available.

Once installed from the Google Play Store, these third-party TTS engines will appear in your Text-to-Speech settings.

If you’ve installed a new Text-to-Speech engine and you want to change it, go to the “Text-to-Speech” settings menu.

At the top, you should see a list of your available TTS engines. If you have a Samsung device, you might need to tap the “Preferred Engine” option to see your list. 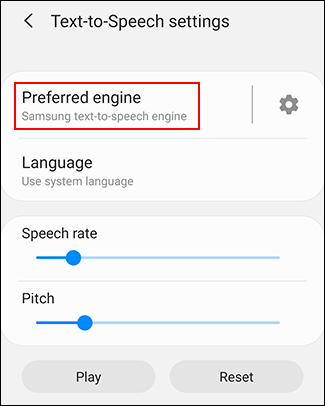 Tap on your preferred engine, whether it’s Google Text-to-Speech or a third-party alternative. 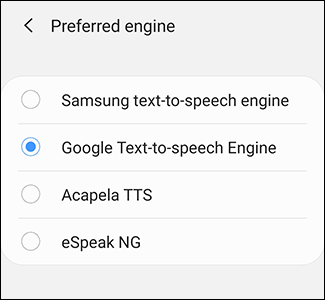 With your new TTS engine selected, tap “Listen to an Example” or “Play” (depending on your device) to test it.

For most users, the default Google or Samsung Text-to-Speech engines will offer the best sounding speech generation, but third-party options could work better for other languages where the default engine isn’t suitable.

Once your engine and languages are selected, you’re free to use it with any Android app that supports it.

How to Change Your iPhone and iPad Keyboard’s Language

How to Fix Crashing Apps on an iPhone or iPad

How to Change the Default Heading Styles in Microsoft Word

How to Position Images and Other Objects in Microsoft Word

Apple Doesn’t Collect Much Data About You